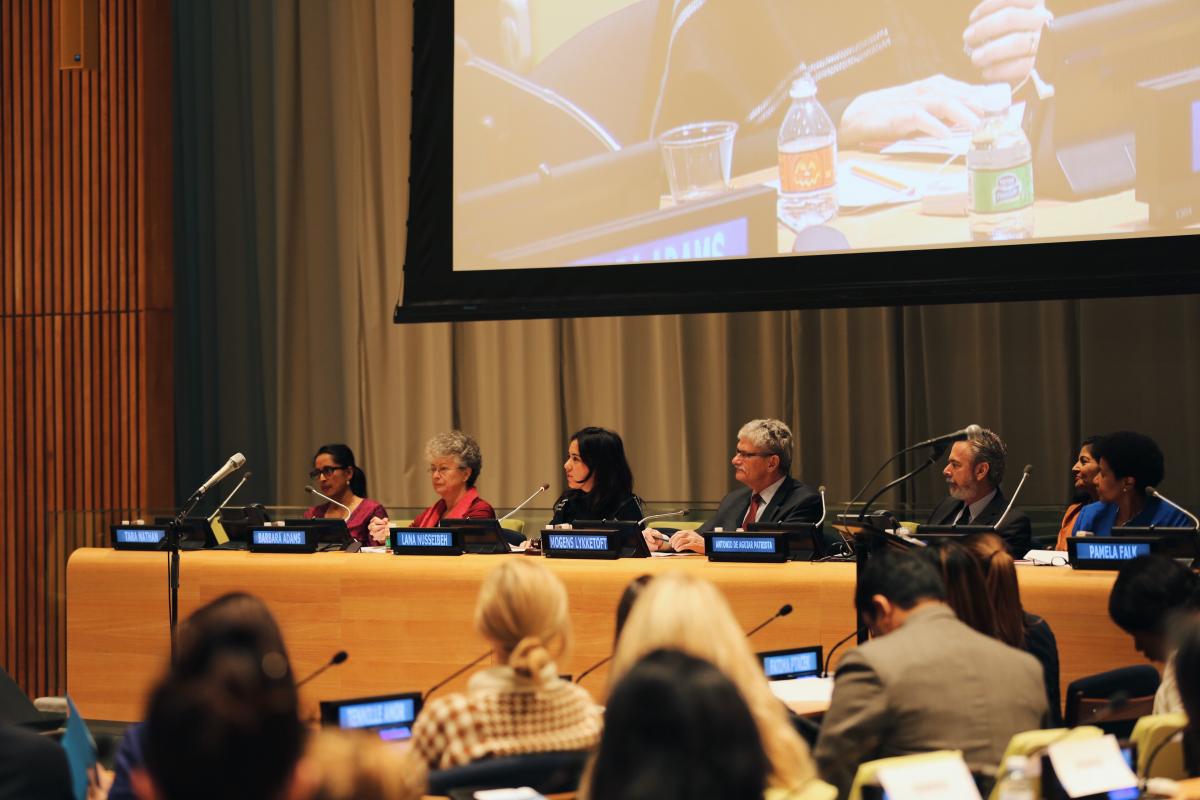 New York – Ambassador Lana Nusseibeh, Permanent Representative of the United Arab Emirates to the UN, delivered remarks at a ‘Planet 50-50 by 2030’ event in honor of International Women’s Day. The event was hosted by UN Women and focused on the importance of achieving gender equality as part of the 2030 Agenda for Sustainable Development that includes targets on gender parity, empowerment of all women and girls, ensuring inclusive and quality education for all, and promoting lifelong learning.

The high-level event brought together senior UN officials, including an address from UN Secretary-General Ban Ki-moon, and speeches from Mogens Lykketoft, President of the UN General Assembly, and the Executive Director of UN Women, Phumzile Mlambo-Ngcuka. Distinguished panelists also included Ambassador Antonio de Aguiar Patriota, Permanent Representative of Brazil to the UN; Barbara Adams, Chair of the Board of the Global Policy Forum; Tara Nathan, Executive Vice President of Mastercard; Fatima Ptacek, a youth actor; and Monica Singh, a violence against women activist.

During her remarks, Ambassador Nusseibeh underlined the UAE’s leadership in advancing women. “Since our nation’s founding, our leadership has made the full and meaningful participation of women in every aspect of our society a bedrock principle, recognizing that women are equal partners in the development of the nation.”

Ambassador Nusseibeh shared the UAE’s national story of empowering women, including the steps the UAE has taken towards achieving gender parity. “The UAE government has institutionalized women’s participation in our legislature and judiciary with the understanding that including their perspectives is a prerequisite to creating functional and just societies. We have created a number national institutions dedicated to empowering women.”

Ambassador Nusseibeh went on to highlight UAE entities, plans, and policies charged with advancing women, such as laws mandating women’s participation on government boards and the Gender Balance Council. She underscored the importance of the National Strategy for the Advancement of Women, which was established under the auspices of Her Highness Sheikha Fatima bint Mubarak thirteen years ago.

In stressing the strong linkages between education, women’s empowerment, and economic growth, Ambassador Nusseibeh established that education is a top priority for all citizens in the UAE. “This is translating into a major boost for our industries, which urgently need local employees, as well as gender balance in the workplace that reinforces society’s positive attitudes toward female achievement,” she said.

Following Ambassador Nusseibeh’s remarks, panelists called for expressions of political will to achieve true gender equality in the countdown to 2030. Phumzile Mlambo-Ngcuka, Executive Director of UN Women, remarked, “The participation of women at all levels and the strengthening of the women’s movement has never been so critical, working together with boys and men, to empower nations, build stronger economies and healthier societies.” This sentiment was echoed by all panelists.

This high-level event joined with thousands of others around the world to commemorate International Women’s Day.