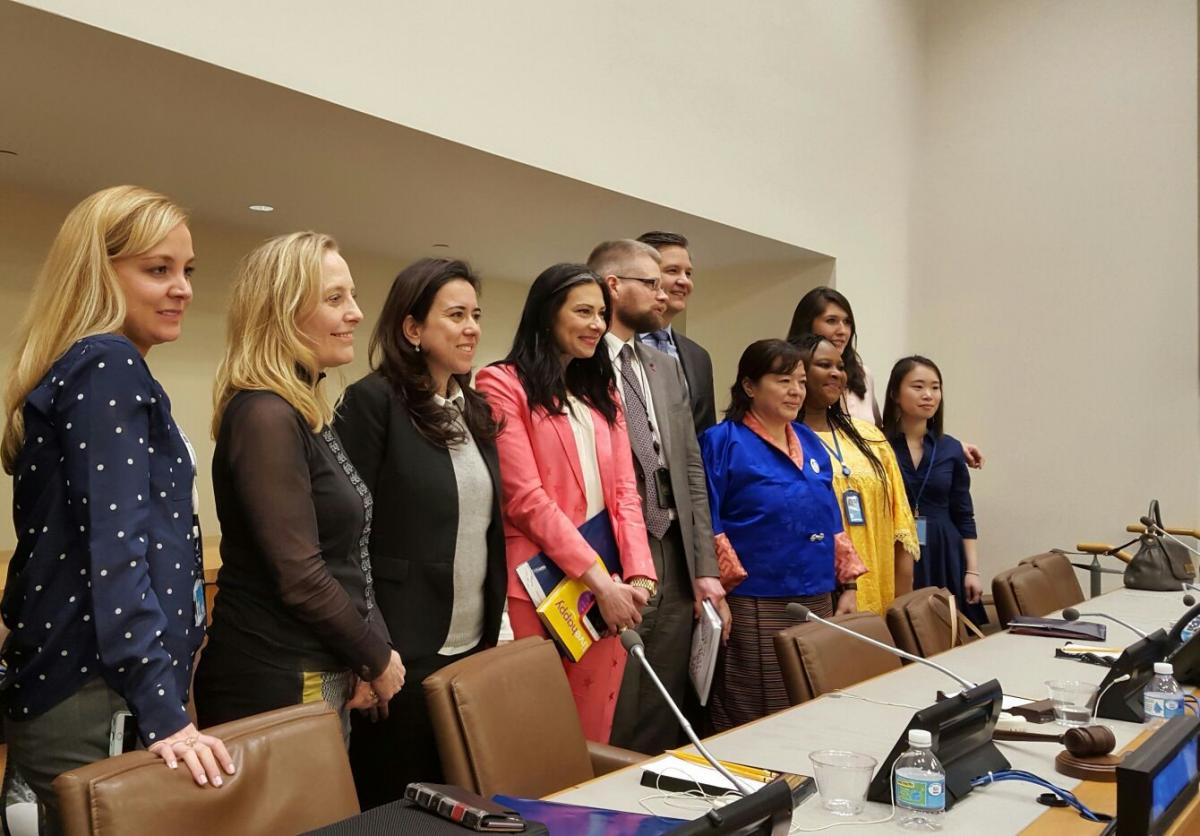 New York – On the occasion of the International Day of Happiness (March 20), Ambassador Lana Nusseibeh, Permanent Representative of the United Arab Emirates to the United Nations, delivered remarks on the UAE’s efforts to foster happiness at home and abroad, as well as the planned work of the newly appointed Minister of State for Happiness, Her Excellency Ohood Al Roumi. Ambassador Nusseibeh spoke as part of a panel briefing hosted by the United Nations Department of Public Information.

The session, “Happiness and Gender Equality in the Sustainable Development Goals”, examined the various means to achieving happiness, including through promoting healthy lives, furthering overall well-being, and supporting gender equality. Addressing a group of international NGOs associated with the United Nations, Ambassador Nusseibeh emphasized that creating conditions conducive to delivering happiness for individuals, families, and employees has been a top priority for the UAE government.

“One of the major achievements of the Federation, in my view, is realizing happiness for its society,” said Ambassador Nusseibeh, quoting the UAE’s founding father His Highness Sheikh Zayed bin Sultan Al Nahyan. She went on to add that His Highness Sheikh Zayed’s goal has been continued by his successors: “happiness and overall well-being has been a pillar of how the UAE defines its success as a country and is ingrained in our culture and our leadership’s approach.”

She informed the gathering of experts, NGO’s and government representatives that the recently appointed UAE Minister of State for Happiness will be looking at ways to prioritize happiness in policymaking by integrating happiness and positivity as the overarching goal in all government policies and programs. Ambassador Nusseibeh also highlighted efforts underway in the UAE to promote positivity and happiness as a lifestyle, and to develop indicators and benchmarks to measure happiness. “The UAE believes that this conversation should be front and center, and our new Minister for Happiness has been tasked with making that a reality in our country,” said Ambassador Nusseibeh. She also credited the creation of the new post of Minister of State for Happiness to the visionary leadership of His Highness Sheikh Mohammed bin Rashid Al Maktoum, Vice President and Prime Minister of the UAE, and the Ruler of Dubai.

She continued on to underline the key linkages between happiness and the empowerment of women, noting the critical role that the UAE’s leadership has played in enshrining these core principles. “The UAE firmly believes that gender parity and promoting women’s rights and participation are at the core of peaceful and prosperous societies,” said Ambassador Nusseibeh. With regard to the connection between women’s empowerment and happiness, she stated, “institutionalizing the participation of women and youth in all sectors of society in our view sets the foundation for achieving happiness.” She underscored the UAE’s continued commitment to promoting gender empowerment, inclusiveness, tolerance, and happiness around the world.

In her concluding remarks, Ambassador Nusseibeh encouraged further discussions on challenges to the promotion of happiness around the world, especially as part of efforts to advance sustainable, inclusive development for all. Building on a quote by world-renowned professor of economics and expert on sustainable development Jeffrey Sachs, she said “well- being depends not only on wealth but also on the quality of our human relations… [this basic point] is so obvious but at the same time largely absent from global politics and public policy making. The UAE is making it the center of our public policy discourse and part of our delivery as a government to citizens and residents in the UAE.”