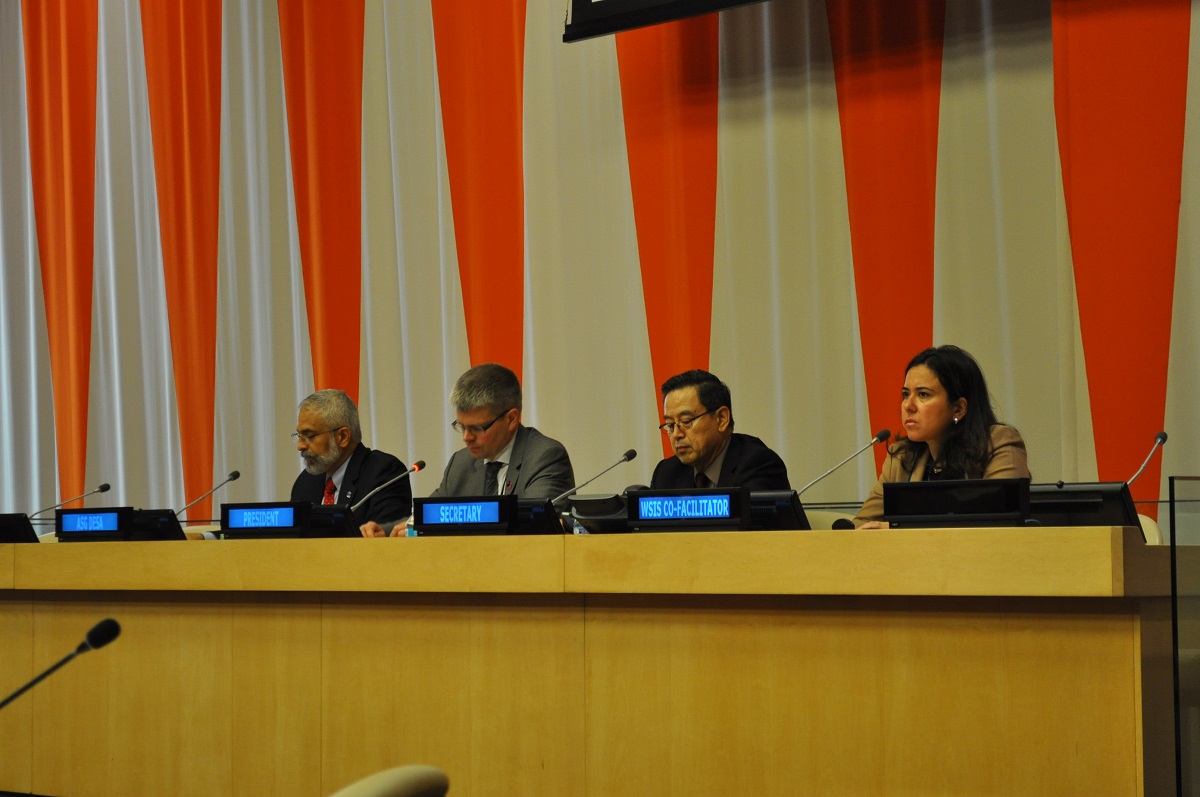 July 2, New York: The United Arab Emirates and the Republic of Latvia today concluded the first phase of co-facilitating the United Nations’ review of the World Summit on the Information Society (WSIS), a landmark global process to work towards a vision of a people-centered, inclusive and development oriented Information Society.

The President of the UN General Assembly, the Honorable Sam Kutesa, appointed on 1 June the Permanent Representatives of the UAE, Ambassador Lana Nusseibeh, and of Latvia, Ambassador Janis Mažeiks, to co-facilitate the review, the results of which will be captured in an outcome document for adoption at a High Level meeting of the UN General Assembly on 15-16 December 2015 in New York.

President of the UN General Assembly, the Honorable Sam Kutesa, appointed on 1 June, Ambassadors Nusseibeh and Mažeiks to facilitate the review and adoption of an outcome document in December. In his statement to the meeting, which was read by Einar Gunnarsson, the Permanent Representative of Island, Mr. Kutesa highlighted the significance of the review process saying that it takes place at an opportune time as the international community works to formulate an ambitious and transformative post-2015 development agenda.  “It is vital that through this review, we not only take stock of the progress that has been achieved in the implementation of the WSIS outcomes, but also gather momentum to further unleash the potentials of ICTs to contribute to the achievement of sustainable development,” he added.

Commenting of her appointment as a co-facilitator, Ambassador Nusseibeh said, “It is an honor for the UAE to co-facilitate the UN’s review of the WSIS outcomes, and to work with Member States and of non-government stakeholders to arrive at a common vision for the future.” She added, “The Information and Communication Technology (ICT) sector has undergone truly remarkable transformation since the WSIS process began in 2003, and we are identifying a range of opportunities and challenges that must be addressed at the global level.”

The UN estimates that globally mobile subscriptions have grown from less than 20% in 2003, when the UN held the first WSIS conference, to 96% today.  Internet access has increased from around 10% in 2003 to 46% today.  At the same time, the UN has pointed to persistent gaps in ICT use and content creation between developed and developing countries, as well as between men and women.  A number of ICT-related concerns – such as privacy, security, and cross-border Internet regulation – have also rapidly climbed the political agenda.

This week’s meetings saw discussions among Member States and non-government stakeholders on their expectations for the final outcome document, as well as presentations by UNCTAD, ITU and UNESCO of progress relative to goals set out since 2003, particularly for ICT’s contribution to global development.

The intergovernmental preparatory meeting on July1 was followed by an informal interactive stakeholder consultation on July 2, during which groups and individuals from the private sector, civil society, and academia shared their views and perspectives. Panelists included Microsoft, the Internet Society, ICANN (the organization-managing internet addresses worldwide) and many others.

“The next six months will of course not resolve all the issues that have arisen over the last 12 years,” said Ambassador Nusseibeh.  “However, we are now in a strong position to identify the critical points for collective action, and determine what it is realistic for December.”

The UAE’s appointment as a co-facilitator of the review was widely welcomed, given the visibility of the UAE Telecommunications Regulatory Authority (TRA) in promoting and strengthening the WSIS process, as well as the country’s rapid advancement in ICT since its independence.

“The UAE is in many ways an example of what the WSIS process aims to achieve,” said Ambassador Nusseibeh.  “We are a developing country that has used a mix of policy interventions, public-private partnerships, and international cooperation to achieve almost universal mobile and internet access.  We have moreover used ICT to strengthen our education, healthcare, and resource management systems, ensuring social and environmental benefits alongside economic growth.”

Commenting on the UAE’s appointment as co-facilitator, H.E Hamad al Mansouri, Director General of TRA said, “We are very pleased with the decision to appoint Ambassador Nusseibeh as a co-facilitator for the United Nations WSIS Review. We view this as an acknowledgement to the progressive role the UAE has been playing to achieve the objectives of the summit, and as a testament to our sincere efforts. We wish her all the best in this important role,” he added.

Al Mansouri noted that Information and communication technologies have long been recognized as key enablers for bridging the digital divide and have proven to be instrumental in the delivery of information and services in health, education, trade, commerce and other fields. “Since 2003 and 2005, the WSIS process has been an important instrument driving ICT development and we at the TRA have been supporting the missions of WSIS process nationally through WSIS national committee and internationally by forming partnerships with the ITU and other UN agencies.

The second preparatory meeting for the WSIS review will take place from 20 to 22 October 2015 in New York.  Further information is available at http://unpan3.un.org/wsis10/