Ambassador Jun, thank you for organizing this important meeting, which we are happy to be co-hosting it with China and the Permanent Missions of Egypt, Kenya, Mexico and South Africa. A really important cross-regional briefing today.

Of course, we note the important context set by the briefers today, I think very thought provoking. The Secretary-General himself has identified the great promise, but also the potential risks that we have been speaking about this morning—some anticipated, some unintended—of these new technologies. The sum of all these parts is, yes tech can become a peace enabler, but also a disruptor. So I think it is prudent Ambassador Jun that China brings this issue to the Security Council in this focused way in order for the Council to be keep abreast of new developments in this fast-developing field for diplomats and diplomacy today.

In the UAE, this is really a priority file for us and that is why we appointed a Minister of State for Artificial Intelligence in 2017. We are giving a lot of importance and priority to the potential of digital transformation on the countries’ economies and societies. I think these are the benefits of what we have been speaking about today. But also our “National Artificial Intelligence Strategy 2031” aims at positioning us in this global debate around the future of AI and its place in all of our societies so that it can be used as a force for good, rather than a disrupter.

I think, as others have mentioned one of the things, to note in our Strategy is that it will seek to ensure strong governance and effective regulation to improve cybersecurity protections and prevent inefficiency and gaps from forming in the global architecture as we approach these news topics.

Emerging technologies, as we said today, do pose some potential threats to international peace and security. And from our point of view, from our perspective and from where we sit in the Middle East, and I’ll bring that perspective to bear in two or three short points this morning. What is particularly concerning to us is extremist and terrorist groups using social media to spread hate, violence, and of course pursue recruitment to their ranks, which has been a big feature of how they use and harness social media and technology in that nefarious way.

Recognizing this fact, the UAE with the United States, established The Sawab Center specifically to counter Da’esh narratives online, as part of the efforts of the Global Coalition Against Da’esh. Now we also host Hedaya Center, an international forum of 29 countries and the European Union, that is now one the world’s most preeminent centers striving to counter violent extremism, particularly online. These institutions are a part of the expanding repertoire globally to counter the abuse of emerging technologies by terrorist and extremist groups. So plugging in and engaging with these groups and institutions as they emerge and information-sharing with policymakers, and in particular, the Security Council, is going to be extremely important going forward.

Again, the premise of course is one that I think every speaker today agrees with: the promise of emerging technologies remains vast.  This was made apparent during the UK-hosted Arria-formula meeting on 12 May.  In that meeting, the Investigative Team to Promote Accountability for Crimes Committed by Da’esh (UNITAD) shared a fascinating report about the new technologies that the Team had utilized in helping collect evidence of crimes by Da’esh many years after.

The technologies that the Team has developed will help ensure accountability and will facilitate evidence-gathering for the horrific crimes committed by terrorists.  We can see this outcome, it is practical in the work that UNITAD has done in investigating the violence, including sexual and gender-based violence committed against the Yazidi community. So we are proud to have contributed to the work of UNITAD in helping to bring accountability and justice to the victims of Da’esh. I put this forward today as just one case study of how the potential for the use of these new technologies can really be harnessed up for the work of the Security Council.

Also, recent programs of the UN utilizing AI-powered tools to support peace negotiations in war-torn countries demonstrate the increasing uptake of new technologies. For example, later today, the UAE will be co-hosting a panel with Switzerland, Mexico and DPPA to discuss the potential of AI and other technologies to transform peacemaking, mediation and peacebuilding and enhance the effectiveness of the delivery of humanitarian aid.

I agree with the premise before here today, it is really incumbent upon the Council to adopt this more forward-looking approach to cutting-edge technologies, seeking a better understanding of both the opportunities, but also very importantly, the potential risks that these technologies are posing to international peace and security, and coming together as an international community to best address them. I think it is something we must commit to and contribute to. So we hope to make this issue a priority going forward ourselves from within the Security Council next year.

Thank you Ambassador Jun and China for their leadership on this really important topic. 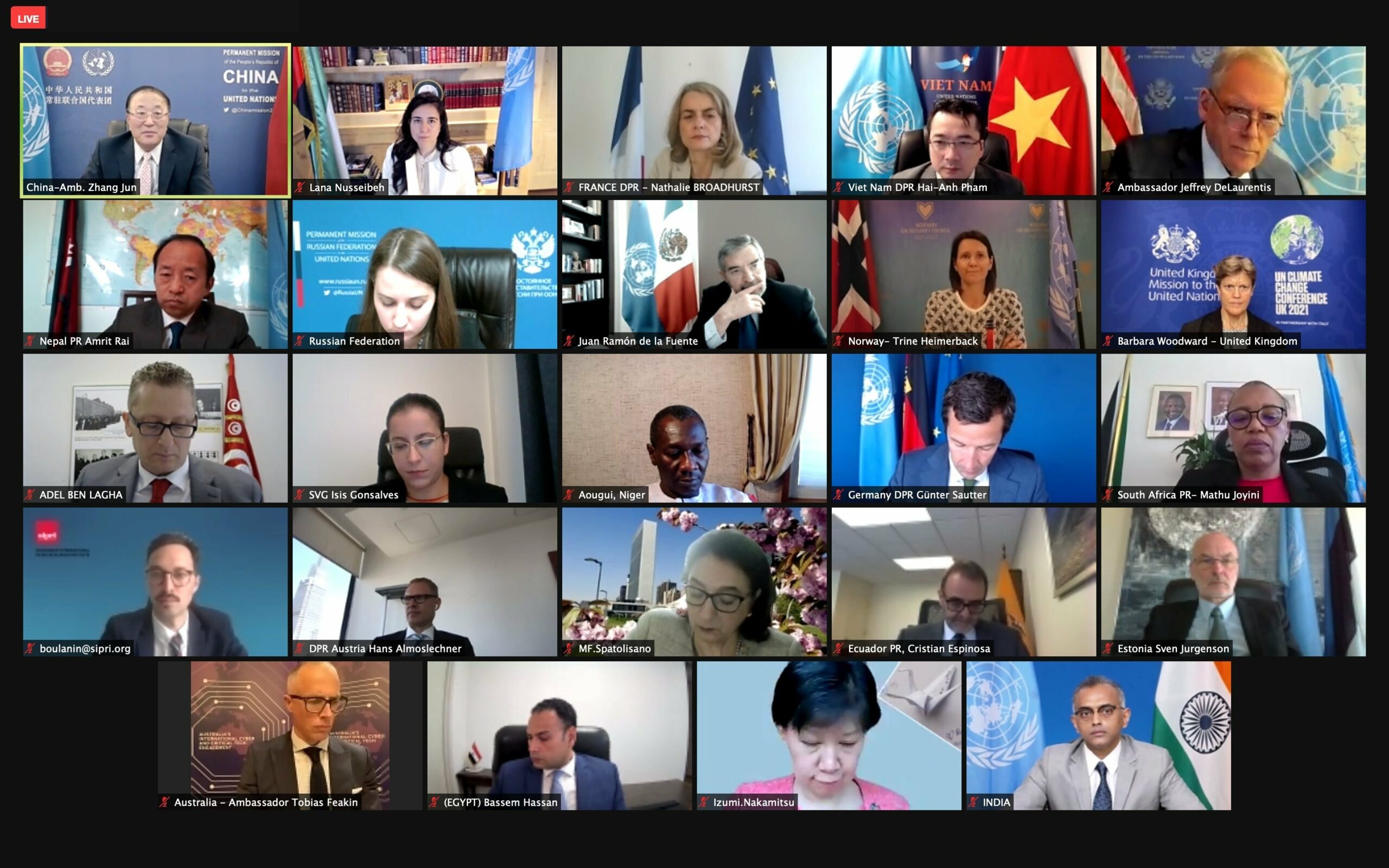