New York – The UAE joined over 170 countries to sign the Paris Climate Agreement during the high-level signing ceremony, convened by the United Nation’s Secretary General Ban Ki Moon, in New York. The ceremony marked the first step in implementing the Paris Agreement, which was adopted in December 2015. 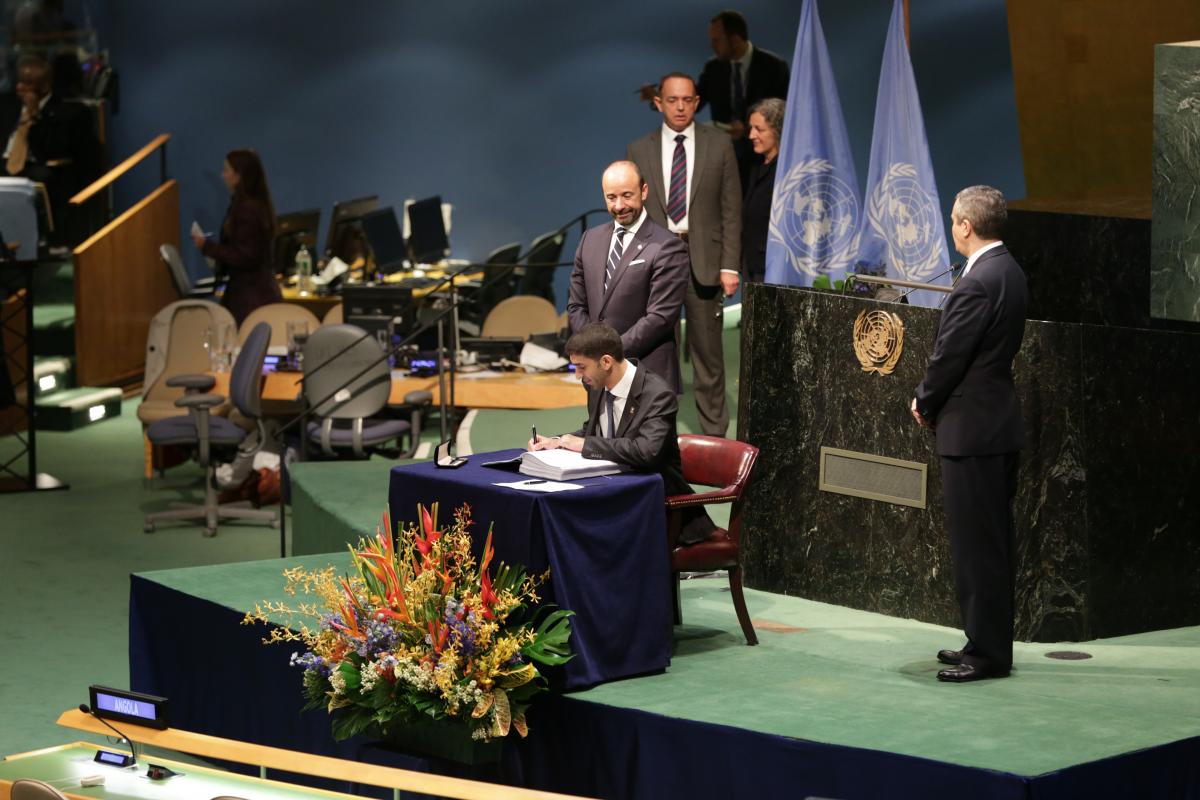 New York – The UAE joined over 170 countries to sign the Paris Climate Agreement during the high-level signing ceremony, convened by the United Nation’s Secretary General Ban Ki Moon, in New York. The ceremony marked the first step in implementing the Paris Agreement, which was adopted in December 2015.

Signing on behalf of the UAE government was Dr. Thani Bin Ahmed Al Zeyoudi, Minister of Climate Change and Environment, who said, “The UAE is proud to be here today to send a united message to the world. We will make Paris Agreement work, and we will work individually and collectively to find the best courses of climate action.”

The Paris Agreement will govern climate action after 2020 by to continue diversifying its economy through a flexible framework that allows countries to determine its own action in mitigating and adapting to climate change. Starting in May of this year, Parties to the United Framework Convention on Climate Change (UNFCCC) will begin a multi-year process of detailing the Agreement to find fair and innovative ways to incentivize all countries, developed and developing, to reach their greatest ambitions.

During his statement at the signing ceremony, Dr. Al Zeyoudi outlined the voluntary steps that the UAE is undertaking to diversify its economy into knowledge driven industries, particularly through the UAE Vision 2021, Green Growth Strategy and Innovation Strategy. “These comprehensive strategies and plans will not only yield emissions reductions benefits, but they also help safeguard our economy for future generations.”

On the margins of the signing ceremony, the UAE and the Kingdom of Morocco signed a Memorandum of Understanding (MoU) aimed at enhancing cooperation on climate change issues and addressing global sustainability challenges. The MoU builds on the strong bilateral ties with Morocco, who will host the 22nd Session of the Conference of Parties (COP22) of the United Nations Framework Convention on Climate Change (UNFCCC), which will be held in Marrakech, Morocco in November 2016.

The UAE delegation also met with their counterparts from Australia, Canada, France, Madagascar, Maldives, Philippines and the Kingdom of Morocco to discuss areas of cooperation in the context of climate change and the environment.

Dr Al Zeyoudi also met with the U.N. Secretary-General’s Special Envoy for Cities and Climate Change, Michael Bloomberg. They discussed what cities can do more to combat climate change.

Razan Khalifa Al Mubarak said that the Environment Agency of Abu Dhabi is committed to play its part and calls for an urgent and multi stakeholder approach to climate change that balances the need to reduce greenhouse gas emissions, decouple carbon dioxide from economic growth, adapt to a changing climate, and engage our community of citizens and residents to do their part in addressing what may be humanity’s greatest environmental, societal and economic challenge.

“Abu Dhabi has remained steadfast in its commitment to the development of its city and its people, and we remain dedicated to supporting this while protecting and preserving our natural heritage. We will remain an active, collaborative player in providing efficient access to reliable environmental data that will equip decision-makers with information that ensures that responsible, sustainable development is the way of our future,” she said.

The signing of the Paris Agreement is a significant step forward on the path to ensure we see global warming curbed to within the 2 degrees above pre-industrial temperatures – that scientists have deemed as a critical threshold. The UAE and all of the other nations that have submitted and committed to Intended National Determined Contributions (INDCs) will need to act decisively, innovate, and collaborate with other nations to curb their emissions.