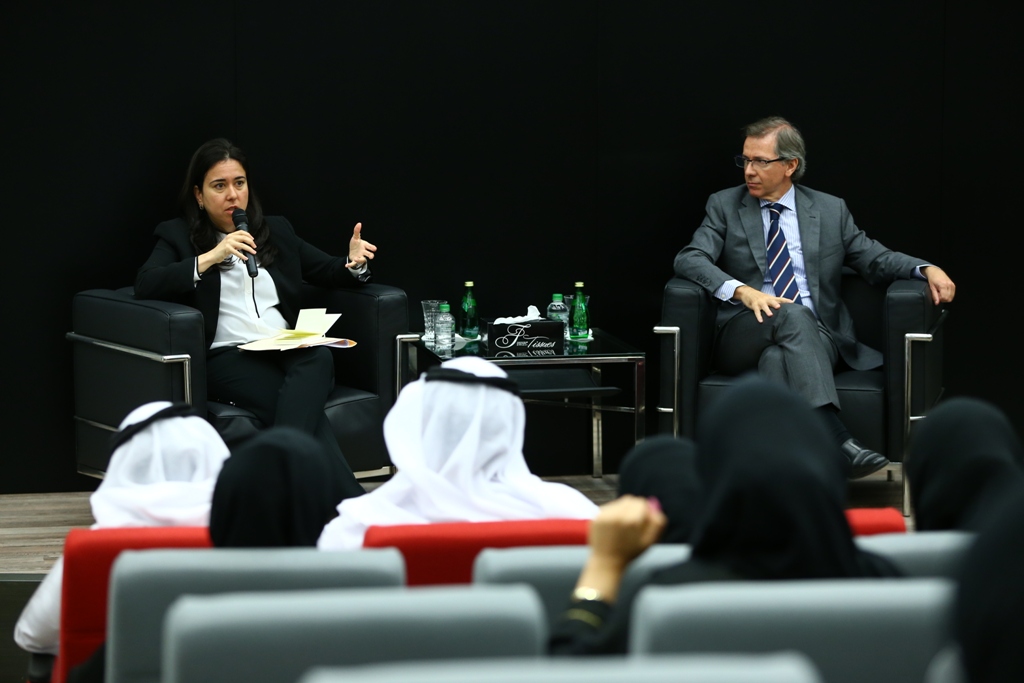 Abu Dhabi – Effective multilateral diplomacy plays a critical role in promoting peace, security, and development around the world, and in particular in the Middle East, explained Her Excellency Lana Nusseibeh, Permanent Representative of the UAE to the United Nations in New York, and Member of the Board of Trustees of the Emirates Diplomatic Academy, during a lecture on the ‘UAE’s role in multilateral issues’, organised recently by Emirates Diplomatic Academy. In the Ambassador’s analysis, the UN remains a critical institution for global order – but it is tested today as never before and needs reform and renewal.

Highlighting the main strategic priorities for the UAE, HE Ambassador Nusseibeh described how the UAE works with its partners at addressing critical developments in the Middle East.  She also shared examples of UAE leadership on global issues in the UN, such as women’s empowerment, humanitarian assistance, sustainable development, and internet governance. She noted that the UN is an effective “tool in the toolkit” of UAE foreign policy, providing a strategic multilateral venue to enhance the UAE’s position as a global thought leader and building the country’s reputation as a key contributor to the United Nations.

HE Ambassador Nusseibeh also reflected on the UAE’s ongoing commitment to defending the peace and stability of countries in the region, and she honoured the ultimate sacrifice made by Emirati soldiers in the service of their country.

Expressing her appreciation for the pioneering role of the Emirates Diplomatic Academy, HE Ambassador Nusseibeh said: “People everywhere increasingly look to the UAE, and to the lessons that can be learned from our country’s development as a society and as a nation.   The most recent Arab Youth Survey shows that among the 200 million young people in the region, the UAE is the country they would most like to live and work in.” She added: “The EDA is preparing young women and men with the skills and tools they need to be effective diplomats wherever they are sent to serve, and to be able to share with pride and confidence the success story of our country.”

Bernardino Leon, Director General of EDA, stated: “The lecture by HE Ambassador Nusseibeh came as a great learning opportunity for the future diplomats at the Academy. HE Nusseibeh has played a great role in raising the UAE’s prestige as a major contributor at the UN level. Her vast knowledge in various subjects, and her potential in contributing to the nation’s strategies makes her a role model for the young future diplomats of the UAE.”

Speaking on the occasion, Bernardino Leon, Director General of EDA said, “HE Ambassador Nusseibeh shared a number of very practical and thought-provoking insights with the future diplomats at the Academy. It was instructive to hear how the team at the UAE Mission in New York identifies opportunities to raise the UAE’s profile as a substantive contributor at the UN, and how they work on advancing the UAE’s foreign policy objectives through multilateral diplomacy.”

Ambasssador Nusseibeh was appointed Permanent Representative of the UAE to the United Nations in New York in September 2013. In this role, she works to advance the UAE’s multilateral priorities at the UN, particularly on regional peace and security issues, humanitarian assistance, women’s empowerment, sustainable development and human rights. HE Nusseibeh recently served as co-facilitator of the overall review of the implementation of the outcomes of the World Summit on the Information Society. She also currently serves, along with the Permanent Representative of Norway, as co-Chair of the Friends of the Future of the UN. In early 2015, she was appointed to serve on the Board of Trustees of the Emirates Diplomatic Academy.

As the leading integrated academic centre in the region, EDA combines academic programmes and training, research and analysis to highlight the UAE’s leading role in international relations. The Academy also conducts in-depth studies on the region and the UAE to build a knowledge base in the field of international relations and diplomacy, and support the Ministry of Foreign Affairs and decision-makers in the UAE.